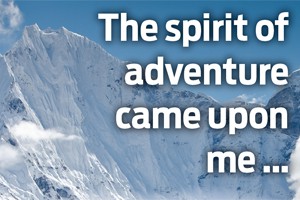 Eric Dark was a doctor who cared passionately about the natural world, an Australian pioneer of rock-climbing, bushwalking and conservation, and a writer concerned with politics, social justice,
civil liberties and reform of the medical profession.

He was also one of the first doctors to head to France at the outbreak of WWI, where he won the Military Cross for “great gallantry and disregard of danger”.

He fell on a neighbourhood road early one morning. When asked what he had been doing, he said,

“The spirit of adventure came upon me”.

This prize is sponsored by Varuna, the Writers’ House and Doctors Who … , a Varuna initiative to nurture creativity, innovation and advocacy in the medical profession.

In partnership with Varuna, the Writers’ House, the Medical Journal of Australia’s creative writing competition is open to all practising and retired doctors, and medical students.

We’re looking for creative pieces of up to 1500 words, grounded in health or medicine and based loosely on the topic for 2016, “The spirit of adventure came upon me …”.

Email: creativewritingcompetition@mja.com.au with any queries

Winning entries and other outstanding pieces of writing will be published in the MJA.

Meet Dr Aajuli Shukla, a Deputy Editor and GP based in Sydney who is also on the AMWA Committee.