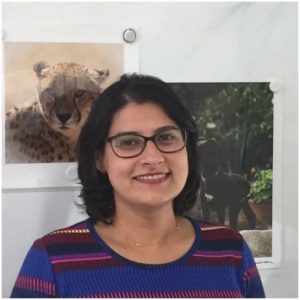 Nidhi initially thought we were spamming her when told her she had won the inaugural AMWA Early Career Award, but then the excitement set it.

Nidhi loves science and learning new things and is currently working at the Australian Veterinary Association. Her first few years of medical writing have been incredibly prolific and she has now written over 50 articles on topics ranging from bulldog genetics to gut microbiota and even fake news!

After completing a BSc, Nidhi spent a few years in a research lab. Looking for something more, and motivated by a desire to force her family and friends to call her ‘Doctor’, she started a PhD in microbiology. Sadly, they have never called her Doctor and instead constantly joke about her research area, which was poo, specifically the microbial ecology of wastewater sludge.  After completing her PhD, Nidhi began working at the Helicobacter and Campylobacter Research Laboratory at the University of New South Wales, thinking she had left her “crappy” PhD behind her. But it wasn’t to be, her relationship with faecal microbiota has gone from “gross!” to engrossed; she is deeply interested in the microbiome and its effects on us (and other species). In 2015, Nidhi realised she had a specific interest in medical and science communication and an exciting career was born.

Nidhi is looking forward to attending this year’s AMWA conference to learn about the different career paths other medical writers have taken and to see what doors will open to new opportunities ahead.

A selection of Nidhi’s writing can be viewed at: www.vetvoice.com.au/search/?q=nidhi+sodhi