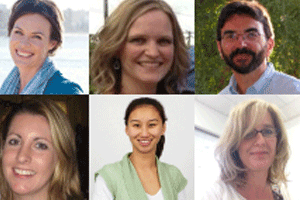 During the 2015 Annual General Meeting, we voted on the new committee positions.

We said farewell to several members and welcomed new ones.

As your new President, I would like to take this opportunity to thank outgoing President Dr Justin Coleman for his tireless hard work, dedication and commitment to our association over the past five years. Fortunately (for myself in particular) Justin will still be involved in AMWA – though he has decided to step down from the Executive Committee. We wish him all the best and are looking forward to reading the copious amounts of writing he will be producing with his newly-found free time!

Georgina Taylor is the winner of the 2020 Early Career Award

The AMWA Executive would like to congratulate Georgina Taylor on winning this year’s Early-Career Award. The standard of applicants for the Award was extremely impressive, however, Georgina was a well-deserved winner. Her submission discussed the importance of vigilance in early cancer detection. Comments from our guest judge Dr Sarah McKay (director of The Neuroscience Academy END_OF_DOCUMENT_TOKEN_TO_BE_REPLACED

Natalie Parletta is the 2019 winner of the Early-Career Award

The AMWA Executive would like to congratulate Natalie Parletta on winning this year’s Early-Career Award. The standard of applicants for the Award was extremely impressive, however, Natalie was a well-deserved winner. Her submission presented the complex and potentially confusing topic of insulin during pregnancy in a clear and accessible way. Sophie Scott (guest judge and END_OF_DOCUMENT_TOKEN_TO_BE_REPLACED

We are excited to announce that the 2019 AMWA conference is now open for registration! Click here to read the full program.

We are excited to announce our first face-to-face networking event for 2021 in Brisbane on Thursday 18 March at Corbett & Claude.
Please join AMWA committee member Eve Vickerson and other health communicators for a relaxed and informal gathering in Brisbane this March!

When:  Thursday, 18 March, 6–8pm
Where: Corbett & Claude, 283 Elizabeth St, Brisbane CBD.
Cost: There is no cost to attend for either members or non-members of AMWA. Drinks and nibbles will be provided, however feel free to purchase something should you require something more substantial.